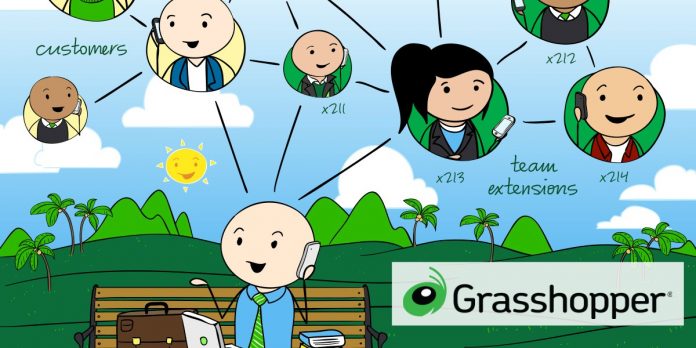 Grasshopper is a virtual phone number provider. They allow small businesses and even entrepreneurs to have their own phone numbers which can be called on landlines or cell phones, simplifying methods of communication that would otherwise be difficult to obtain.

It requires none of the details that stablishing an actual landline would, and it’s far more versatile than anything that your phone company could provide you. See it as a cool extension to landline services, if you would.

In fact, Grasshopper is actually considered to be one of the best virtual phone companies in the world. They offer their services to a wide variety of different customers and allow people to simplify communication without having to pay a fortune to get the services.

Keep in mind that Grasshopper is mainly aimed to be used by small businesses, so we recommend checking out other options if you own a large company.

With an ease-of-use unmatched by many of its competitors, Grasshopper is currently a very popular app that many users are starting to prefer over other more traditional options like Skype. Why is that, though? Find out why so many people think Grasshopper is the best virtual phone program in the world by sticking with us until the end of this review!

Grasshopper might be quite simple to use, but another great advantage that if offers is that it can also be set up as easily as you can imagine.

You can choose up to five numbers to make the app work, and then simply add them to the list of available numbers. Setting up phone numbers is not hard at all, and the app gives you many options to do it. You can use numbers from a list, or even tell the company where you want your number to be located and they’ll assign it to you.

You can fully program the app to redirect calls towards your Grasshopper system and you can even set it up so it asks for a name, and then the name would be read to you before you have to answer. It really makes communication much smarter, and productivity can easily increase because of this.

You can also set up hourly blocks. For example, let’s say that you work from home as an entrepreneur and you don’t want people to be calling you at ungodly hours. You can set the app so it blocks any calls that access the system after 8 pm. It’s really up to you to decide how you want Grasshopper to handle everything, and it really makes it easy for you to set protocols in place.

You can use the features of Grasshopper to assign certain employees to pick up certain calls. For example, let’s say that you assign the “1” extension to customer service. You can redirect every caller who presses one directly to customer service, which simplifies any manual job that you’d have to do if Grasshopper wasn’t installed.

This can be done with any extension, as they are very customizable and the app allows you to play freely with what works and what doesn’t. It’s really up to you to decide what works best for your company – especially if you work with a handful of employees and handle constant phone traffic.

If your company deals with faxes, then Grasshopper is also the right app for you. It allows you to fully manage faxes and properly works with voicemail services to ensure that no message gets lost. Furthermore, the program offers an option that you can activate to make sure that any incoming voicemail gets a direct transcript into a document, avoiding having to listen to the message if it isn’t possible at the time.

Most things in Grasshopper come pre-automated, such as the messages that you hear when you get directed to voicemail. The options are customizable but you do need to stick to the pre-recorded messages that the app offers.

It has everything you need to create a solid phone support line, so you don’t have to worry about incomplete messages. It even has a message for the caller to press which replays all the options available to them.

Another aspect that makes Grasshopper a solid choice for you is the fact that it’s fully compatible with all devices. You can download the Grasshopper app to install services in any iOS or Android device, or you could also use the phone app that can be downloaded to your computer to manage all of your needs directly from a desktop.

You get to choose how you manage, and you get to do it as easy as possible. It’s truly amazing how simple it is to use Grasshopper.

The Uses of Grasshopper and Why It’s So Good

Grasshopper became an even better tool after it was acquired by LogMeIn back in 2018. The company made sure that all of its communication tools became interconnected with Grasshopper, and now the app is easily accessible and you can share calls and information using it and other apps that the company has created, including the screen-sharing service of LogMeIn.

This also made customization of communication tools much easier for LogMeIn, so if you need a screen-sharing software, there’s no better option for you than this one if you intend to buy Grasshopper as well. It’s cost-friendly too, just like Grasshopper.

Unlike many other virtual phone apps, Grasshopper doesn’t require any type of initiation protocol to be entered on the calling device in order to make it work. The app is much more straightforward, as it bypasses some steps that are required by other popular apps and makes it much easier for you to communicate between members of your company.

The fact that it uses less coding protocols to function makes it much cheaper than its otherwise complex competitors. Simplicity doesn’t always pay off, but it does when it comes to an app like Grasshopper.