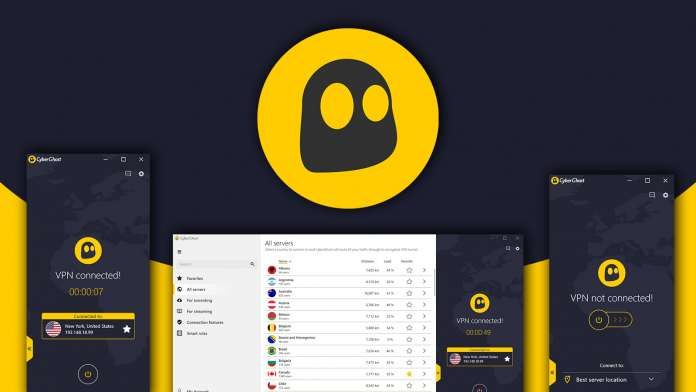 CyberGhost is a zero-logs VPN that offers excellent speeds and lots of strong privacy features. There’s fast access to Netflix and other streaming sites on servers optimized for HD video and the new native app for the Amazon Fire TV Stick is a great addition.

For the privacy-minded, CyberGhost is one of the best providers out there. None of your online activity is logged, while it only monitors the number of people connected to each server to ensure high levels of performance. A top choice all-round.

There are no hidden catches or restrictions. Your card will be charged when you first sign up but refunds are processed in 5-10 working days.

The free trial grants you the full VPN experience with no personal or payment details asked for. A handy pop-up will remind you of your remaining runtime every time you use the service.

CyberGhost accepts a range of payment options including most major credit cards, PayPal and Bitcoin. Unfortunately, it doesn’t currently accept any other international options like Alipay or UnionPay.

At its best, CyberGhost can match almost any provider for sheer up and download speeds, but what it occasionally lacks is consistency.

Local speeds are top-notch, but those connecting further afield may notice a drop-off in performance, with ping times struggling, too.

CyberGhost offers very fast downloads on local connections, peaking at a fantastic 249Mbps in Paris and Singapore, while other hotspots average 158Mbps. Connecting out to the US from the UK you can expect speeds of 56Mbps, more than enough for HD streaming.

Performance was distinctly average across more distant connections, around 33Mbps from Japan to New York, but still more than enough for downloading and general browsing.

Latency is highly variable, so we advise hardcore gamers think about which servers they would expect to use. We logged a zippy 2ms in Frankfurt, Tokyo and Singapore but everywhere else latency was unacceptably high, ballooning out to over 144ms in Vancouver.

CyberGhost’s upload speeds are largely very respectable, making it a solid choice for P2P users. Local upload speeds are consistently around 81Mbps in most locations and peak at 171Mbps in Singapore however power users should look elsewhere as there are much faster options available.

The whole globe is covered, with special attention paid to Europe and North America. The selection of over 3,500 servers is paired with a similar number of IP addresses.

That’s not a huge number of IPs when compared to some of CyberGhost’s top rivals, but it does mean that you get increased privacy without having to sacrifice on choice of locations.

Whatever your device or operating system, CyberGhost can handle it. Aside from the standard platforms, router-level install means that you can get everything covered at once.

browser extensions, too, but they’re not as great as they may first sound. Available on Google Chrome or Mozilla Firefox, they’re entirely free and, regardless of whether or not you’re a paying customer, you only get access to four locations through them.

They’re also only proxies, so will only protect your web traffic. We’d recommend you use them in conjunction with the main VPN.

You can use CyberGhost with a range of consoles and streaming devices by connecting them to a configured router.

You can also piggyback off a VPN connection from another device running the CyberGhost app, such as a laptop or smartphone. The recent addition of a native app for the Amazon Fire TV Stick is also much appreciated.

Dedicated Netflix servers are never a bad thing, and CyberGhost has them in abundance. We’re yet to have any issues with accessing the service in all our time testing.

BBC iPlayer has its own dedicated server, too, although it does occasionally have trouble connecting as the BBC ups its efforts to beat VPNs.

That’s not all, though. While we can’t claim to have tested its functionality with all of them, CyberGhost subscribers also report enjoying using it with:

Torrenting works brilliantly, although there are a couple of caveats: it’s not permitted on US or Australian servers, and only via Windows or MacOS. If you can abide by that then it’s quick and reliable.

An excellent choice for privacy, CyberGhost has one of the most advanced security suites of any VPN available today.

It defaults to our favorite protocol, OpenVPN, it has uses ultra-secure AES-256 encryption, and has a kill switch to make sure your identity stays protected in the event of a connection drop.

We found it to be fully sealed against any IP or DNS leaks thanks to CyberGhost owning all of its own DNS servers, and there’s plenty of extra features for power users to tinker with.

We can’t recommend CyberGhost as a means to beat the Great Firewall as it simply can’t guarantee a reliable bypass – there aren’t any special tools in place to help it do so.

Away from China, though, and it should work for you just fine. Given its presence in Africa and Asia you shouldn’t ever be too far from a server, either.

This is a list of all the information that CyberGhost collects:

CyberGhost claims that this is the bare minimum required to keep the service running optimally, and we’re inclined to agree. There’s absolutely nothing detailed in its logging policy that could be used to identify you should anyone ever get their hands on it.

At a glance CyberGhost’s Romanian jurisdiction may seem less than ideal. Any EU nation makes for a poor base of operations for a VPN due to the body’s data-retention and sharing agreements.

Our concerns are eased by the sheer lack of information collected by CyberGhost, though. There’s so little logged that you would be totally unidentifiable to any law enforcement agency or government body.

Even with all of its bells-and-whistles, CyberGhost is still one of the easiest VPNs to use. Menus are clearly labelled and come with helpful contextual tooltips.

There’s even a set of demonstrative videos on the CyberGhost website that show you just how simple the whole thing is.

Even if you’re a VPN newbie, installing CyberGhost is a very simple process and only takes a few minutes from purchase to connection. There are set-up guides on its website for most major platforms which are both user-friendly and easy to follow.

The process is as simple as downloading the relevant software from the website and following the sequence of installation prompts. These are very straightforward to follow, but should you need any further assistance the set-up guides will make sure you’re on the right track.

The round-the-clock live chat support agents are always friendly and responsive, usually managing to solve our queries in a matter of minutes.

There’s a good chance you won’t ever need to use it, though, as the online troubleshooting guides are pretty comprehensive.

CyberGhost is one of our top picks for strong privacy features and excellent speeds on local connections. Commit to one of the longer plans and it works out very reasonably priced, especially given the host of privacy extras on offer.

Access to Netflix is made simple with dedicated streaming servers, and the new app for the Amazon Fire TV Stick is a bonus for streaming fans. BBC iPlayer access is inconsistent, though.

A strict zero-logs policy makes CyberGhost a great choice when it comes to privacy. First-party DNS servers and access to Tor over VPN are added bonuses that mean CyberGhost is one of the most secure providers on the market.

NordVPN Tested: Too Good To Be True?